The Mystery of the Haunted Skyscraper 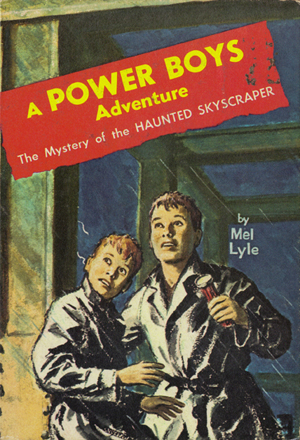 The Mystery of the Haunted Skyscraper was published in 1964, before all that free-love hippy bullshit spread across the USA like syphilis and crippled the teenage necktie industry. By the end of the decade, kids were were wearing paisley shirts and smoking grass. But in '64, kids still listened to their parents and spent their spare time investigating haunted skyscrapers.

The chapters have wonderful titles, like "Trapped!" and "A Grim Warning," and Raymond Burns' line drawings throughout are very well done. Just check out Jack and Chip's expressive faces when confronted by Jedd. But what about the story?

Haunted Skyscraper opens up with Jack and Chip and Dad entering a New York apartment. It's quickly exposited that they've sublet the place from a detective who's gone to Europe. The trio is in the city for a vacation, though, from the sound of it, the boys' life is one long vacation, what with following Pops around the globe on adventure after adventure.

A cast of guest-stars is introduced just as quickly as Dad is called away on assignment. The boys are left to spend their vacation on their own, playing detective and getting involved in labor disputes. Maybe it's the ghost of Dashiell Hammett that's spooking the boys.

Within five pages Dad is summoned to cover a fire in Griffith Park, and two supporting characters are introduced. First up is Ward McGrath (described as "wearing jeans and a not-very-clean T-shirt") drops by looking for Detective Wilson. Learning the detective is away, the kid leaves. ("A lot of boys are in trouble in this town," Mr. Power observed.)

Second in is Mrs. Sam Marsh. (She's in her seventies, "white hair [rising] regally in an old-fashioned hairdo," sporting a "severe" black dress and pearls.) The widow too is looking for Wilson. She is seeking help, convinced her apartment is plagued by a poltergeist.

Long and short of it, the boys have a run in with the building's super in the basement, Mrs. Marsh moves to a hotel (also not the haunted skyscraper), and we're introduced to Professor Jamison, "director of parapsychology at Trent University." He's sniffs around the Marsh apartment, doles out some exposition about mischievous ghostly entities, then disappears from the story.

Eventually, Jack and Chip bump into Ward again who enlists them to help him figure out the strange goings-on at his father's job site. Ward's father works in construction, and mysterious happenings are causing quite the mess at the skyscraper he's helping build. Finally, the haunted skyscraper. I wonder, was this the building Poltergeist III was set in?

Nevermind, I'm already convinced there are no ghosts, and we will get our Scooby moment before it's all through.

Chip and Jack go undercover and snoop around the job site. They are immediately busted by Jedd, one of the workers on the skyscraper. He smokes and has a tattoo: Our first bad guy! Jedd threatens Jack and Chip and tells them to stay away from the skyscraper.

Ward dumps more exposition explaining that Mrs. Marsh is building the skyscraper (having inherited her late husband's construction company), points out the site foreman, and tells Jack and Chip about all the overtime disputes and blah blah blah. Funny stuff is going on and building is behind schedule. There's our mystery.

"We might as well walk over in that direction," Jack said.

Or this clunky paragraph:

He held up work clothes — trousers and heavy shoes. Jack and Chip had used them in England when they had gone down in a coal mine with their father, who was working on a picture story on an English mine.

That's one huge flaw with the books right there. Add to that that the boys don't seem all that bright, and you're begging for trouble. (Then again, this hasn't seemed to hinder Stephenie Meyer any.) Maybe it's just their youthful naïveté, but I think the mystery of the flying sugar bowls may be too much for them. Plus, I don't trust their judgement:

One night the kids return home to find an intruder waiting inside the apartment, gun in hand. Fortunately, the man's looking for Det. Wilson, presumably to do him harm. The boys let him know Wilson is out of the country and the gunman leaves. Frankly, I find it a little distressing that the boys were so irresponsible as to not call the cops. After all, a criminal broke into the detective's apartment, intent on killing him. That's the kind of thing the Hardy Boys wouldn't have let slide. But Jack and Chip didn't even bother to let the authorities know.

There's more drama as a Native American crew member nearly falls to his death from the skyscraper's peek. This confounds Jack, because he knows "for a fact that the Mohawk Indians are as surefooted as — as mountain goats." Well, that's nice. And there are more labour troubles shortly after as all the Native Americans walk off the job. And as Mrs. Marsh notes "They do the high steel dangerous work. It's practically impossible to get anyone else to do that kind of work."

The kids set off to find out why, visiting the Native Americans' spokesperson, Joe Lahache, in Brooklyn. Lahache confesses to the boys, even though he's no reason to, that the real reason he and his crew left was because he saw a ghost on the job site. The ghost, strangely enough, looked exactly like the photograph Lahache carries in his pocket of a coworker "killed on a bridge job."

Naturally, Jack and Chip decide to spend the night in the skyscraper and unravel the mystery of the ghost. They pack up their flashlights and cameras and get involved in a game of cat and mouse with the night watchman. As thunder and lightning rages around them, the boys catch a glimpse of a spook, and Chip snaps a photo of him. Dashing home to develop the film doesn't clear anything up. The apparent ghost turns out to be Ward McGrath.

Stranger still, the next morning Mr. McGrath calls asking if Jack and Chip have any idea where Ward is. Turns out he didn't come home last night. The boys of course lie, saying they haven't seen him, and certainly didn't photograph him lurking about the skyscraper's rooftop in the dead of night. I am seriously beginning to question the character of these two kids. When Chip suggests they let Mr. McGrath know what they saw, Jack shrugs it off, saying "He'll probably turn up." Christ.

Returning to the skyscraper to search for Ward on their own and are summarily taken captive. Unknown assailants throw bags over their heads and tie them up before the boys make any headway on their investigation. The good news is Jack finally gets his sole piece of useful information: He notices a splatter of green paint on his captor's pant leg.

Jack, Chip and Ward are promptly discovered, revealing the flaw in trying to hide someone in the middle of a busy construction site. And as luck would have it, just about every other character in the book arrives at the skyscraper at that moment: Mrs. Marsh, Mr. Bancroft, Lahache, the foreman, Mr. McGrath, the Chief of Police, and even the super from the boys' building. Good thing too, this gives Jack the opportunity to bust the case wide open.

He immediately finds a blow up of Lahache's photo slathered in green luminescent paint, proving the ghost a fake. He also spies the culprit who tied him up, the same green paint on his pant leg: It's the foreman! Huh? What did he have to do with anything? Nothing really. Turns out he's something of a misogynist, and didn't want to work for a woman, especially the wife of the man who never promoted him. Oh, okay.

The foreman then cops to having his magician brother rig Mrs. Marsh's apartment to appear haunted. Just to fuck with her. The brother, by the way, turns out to be the building's super. Or at least, the guy the boys assumed was the super. Hey, Jack, Chip, just because some guy is lurking about the basement doesn't necessarily mean he belongs there. Keep that in mind for next time.

So all the stuff with Jedd and Bancroft and the boys following them and spying on them and generally being a nuisance was... well, it had nothing to do with nothing. Mind you, that was most of the book. Only in the last few pages do the boys discover anything relevant to the haunting.

Now, I'm no expert on mystery novels, but I thought the author was supposed to pepper the book with clues throughout, and perhaps, if the reader were clever enough, he might figure out what was going on before the protagonist did. There's nothing in the story that ties to the ending. The foreman is mentioned a couple times in passing, and no indication is given of his ill will toward Mrs. Marsh. It's as if the first 200 pages were largely a distraction, one long red herring maybe, if the author put that much thought into it.

The books wraps up with the boys returning to their sublet, where dad waits, having finally returned from California. But he's not alone. He's brought the boys a dalmation. Maybe the dog will prove smarter than the boys. Fingers crossed.
Posted by Deeky at approx. 08:00