It looks like somewhere in the neighborhood of 300 people have downloaded the first installment of Radio Shakesville so far. That's downright humbling. In all honesty I was expecting maybe 15 or 20 people to be interested. Thats it's 15 to 20 times that is mind-boggling. The only down side here is that my wee little b-movie website can't handle the traffic, and I am going to need to find another place to host the shows. But no worries, I've got that under control.

Just FYI, the show will be listed on iTunes (I'll provide that link with the next show). Also, I've a list of all music used in the show posted here, with handy links to purchase said songs, if you're so inclined.

As I mentioned in the podcast the next episode will focus on women in popular music (with a more appropriate title and release date TBD). And this is where I was thinking you could help. My hope is to make this a community project, much as this whole blog is a community made up of its posters, guest posters, readers and commenters. Here's all you need to do: Pick up the phone. Just call (641) 715-3900, extension: 44515 and leave me a message.

Tell me what female musicians/bands have inspired you, what song speaks to you, what moves you as a woman, a feminist, an ally. Or just request something. Don't feel obligated to leave your name, remain anonymous if you like. (And if you're shy, well, so am I, so is Liss, and if we can get outside our little introverted shells and let everyone hear us, maybe you can too. And if you truly can't, hey, that's okay.) Just call in. Say something. Say anything.

I want to create a document of women's voices, and how women, feminists, and their allies relate to music and the world around them, but I can only do that with your help.

Separation of Church and Taste

Hey, I've got nothing against you Christian types, what with your ancient rites and rituals and piety and stuff. I've fucked dated my share of Christians, including a (former) conventual friar. I like certain aspects of your religion. Thou shalt not kill, for example. That's solid. Some of the stuff I'm not so keen on. Your hatred of money isn't for me. And I am pretty sure i don't want to smell like myrrh.

But, let me tell you, if there is one thing I ain't gonna do is sprinkle my mashed potatoes with Christian salt. An atheist has to maintain his principles, after all.

Which is why I've* created Cthulhu's Atheist Salt: It's just like regular salt, but without any of that "blessed by an Episcopal priest" nonsense. And I assure you no rabbis came anywhere near this stuff either. It's yummy, it's tasty and it won't burn your tongue simply for being a nonbeliever. Coming soon to a health foods store near you!

Another Spoonful of Stupid

I've avoided writing about this for a while because A) I am lazy, and 2) I was waiting for this story to be debunked as a hoax. Clearly, this idea is so asinine, no one could be so stupid as to actually try this. Right? Because you'd have to be a right real fuckin' moron to get so pissed off about kosher salt that you'd try to market an alternative "Christian salt." But that's exactly what some douchebag is attempting.

Joe Godlewski says he was inspired by television chefs who repeatedly recommended kosher salt in recipes.

"I said, 'What the heck's the matter with Christian salt?'"

Explaining himself, Godlewski said "This is about keeping Christianity in front of the public so that it doesn't die." Yeah, because you hardly ever hear about Christians anymore. Christianity is like the Jordache of religions, gone the way of the Triceratops (but not because of evolution, mind you).

If this this Christian salt thing takes off, Godlewski plans to branch out to other items, including "rye bread, bagels and pickles."

Okay, kids, Radio Shakesville's first podcast is done. You can listen to it here.

On this show: excerpts from Satanic Messages in Rock Music, Liss and I discuss what's showing at the movies (there be spoilers, fair warning), and I play music from The Pogues, Brian Eno, Patti Smith and more.

If possible, please subscribe to the podcast. Subscribing gives me a better idea how many people are actually listening to this thing.

I'm also taking requests for songs in future podcasts. Just call (641) 715-3900, extension: 44515. Note, all calls are recorded and may be used in future shows. So if you're shy or don't want your voice broadcast for all to hear, send your request via email.

So, listen up, and tell me what you think.

(A couple of technical notes: using the "Play Now" option has resulted in stuttery playback for some users. It's probably best to right-click and use the "save target as" or "save link as" option, depending on whichever browser you're using. Unfortunately, the "save target as" option isn't available in Firefox, (which is one more reason I stick with IE, just sayin'). Of course if you subscribe, the podcast should be downloaded automatically directly to your hard drive.)

TV That Gives Me A Boner 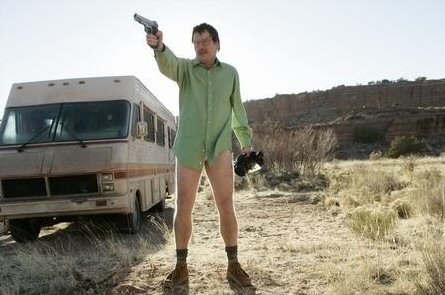 Say Hello To The Night

Thin lips are ugly. Really. I saw it on the internet:

Quote of The Day

"Does he have a 'Delete' key on his computer? If so, than he should use it much more frequently." — Ed Whitson, commenter at nytimes.com, in response to a piece titled Things Judd Apatow Keeps In His Office.

He also plans to run for president. Of Texas.

Now, you might be saying to yourself, "But Texas isn't a country, that doesn't make any kind of sense." You're right. But keep in mind, this all seems to be Glenn Beck's idea, so sense doesn't enter into it.

Chuck firmly believes we're heading for "a second American Revolution." And that revolution will likely start in the Lone Star State.

Anyone who has been around Texas for any length of time knows exactly what we'd do if the going got rough in America. Let there be no doubt about that. As Sam Houston once said, "Texas has yet to learn submission to any oppression, come from what source it may."

And what's all this oppression he's so pig-biting mad about? The huge national debt, our meddling in the Middle East, "partisan politics and runaway spending," and a congress and president who "stampede" the Constitution. If you think Norris is talking about Bush, he's not. All this bad shit has only happened in the last 50 days or so. Before that everything was peachy keen.

Anyway, because the country is going down the toilet in a spree of runaway spending, rampant totalitarianism, and not enough Jesus, Norris believes Texas will secede, and in fact, has the very right to. That right has something to do with their constitution, and their once having been a republic and something about their annexation at the hands of President Tyler that gives them special dispensation to split off whenever the fuck they feel like it. Norris wasn't entirely clear on this point, and I don't suppose anyone ever pointed out that Texas did secede once, back in 1861, and, well, you know, that didn't work back then and wouldn't now.

Nonetheless, I wish you the best of luck on your election bid, Mr. Norris. I hope your platform of karate-based justice speaks to the populous!

On a side note, Chuck and Beck have also teamed up for the über-creepy and sinister sounding We Surround Them movement. We Surround Them is vaguely threatening, and threateningly vague. And kind of stupid. Among the 12 values of We Surround Them: Charity. And among the 9 principles: "Government cannot force me to be charitable." Umm, okay. I'm not sure what else it's about. Maybe that's what the TV special is for.

The whole thing is probably a lot of wankery by and for priveledged douchebags, the kind of "oh, woe is me, it is so hard to be rich and white and Christian in this country" whining Beck and his cohorts are expert at. Of course, to experience it for yourself, you'll need to tune into We Surround Them: The Unveiling this Friday on Fox. That's the event where "thousands of cell groups will be united around the country in solidarity over the concerns for our nation." Cell groups? Really? I told you it sounded threatening.
Posted by Deeky at approx. 12:00 0 comments

Europa and the Pirate Twins

I was sitting at my desk just now, totally not writing a post about Chuck Norris, listening to my iPod, and thinking, "wow, this is some really good shuffle I got going on today." To wit, the last ten songs I heard:

Why don't I have my own radio show already?
Posted by Deeky at approx. 17:00 0 comments

If there was one thing Jakob knew it was that the ladies loooved denim.
Posted by Deeky at approx. 14:00 0 comments

Available now: The Raymond Scott 100th Anniversary Doll and CD Set. Because what the world needs is more dolls based on jazz musicians. Watch Scott here.

A local newspaper recently published an op-ed piece in favor of gay marriage that's been bouncing around the community here the last couple weeks.

It is within everyone that you have to be a better person, live for a better cause, and provide for the better life. It's my story, or rather struggle, that I hope you’ll see why America needs its views changed on homosexuality.

But what makes this piece truly interesting is its lead sentence: "I’m 14 years old, and yes, I am gay."

I'm struck by the amount of courage this must have taken, to risk all that being "different" can entail, to expose one's self to verbal and physical abuse. But it also pleases me to know that we're in an age where a kid can write something like this, and that maybe his schoolmates' reactions will be nothing more than "hey, cool, whatever."

It reminds me that from here, things are only going to get better. Like Battlin' Bill Heslop said, "You can't stop progress."

** A special prize to whoever is the first to name the book I am currently reading.
Posted by Deeky at approx. 13:00 0 comments