Barack Obama recently referred to Ludacris as a "great talent" (yet another thing he's been dead wrong about) and it seems that the two have more than a passing acquaintance, and so, as maybe a thank you of sorts, Ludacris has written a new song in Obama's honor titled "Politics."

Ludacris … demands "Get off your ass, black people, it’s time to get out and vote" and "Paint the White House black." He then goes off on McCain ("He don’t belong in any chair unless he's paralyzed") and even calls George W. Bush "mentally-handicapped."

What Rolling Stone fails to mention, and it's one of the reasons I'm writing this, is that Ludacris also refers to Hillary Clinton as an "irrelevant bitch."

The world is ready for change, the world is ready for change. Except calling women bitches isn't really much of a change. In fact, it's the same old same old. And yet again, another major media outlet lies complicit, completely whitewashing the story. To RS, it's not even worth reporting. I am going to guess, as far as the editors at Rolling Stone are concerned Clinton is a bitch. They didn't endorse her, so why even mention her? Why even note that yet another Obama supporter called her a bitch?

The article barely even touches on Ludacris' attacks on McCain and Bush. Ready for change? Ready for progress? Making fun of the disabled is all about change. Yeah, I get it: the more things change, the more they stay exactly. fucking. the. same.

The Obama camp did, of course, condemn the song, calling it "outrageously offensive." Wevs. Sure, it's nice and all that his campaign can denounce these attacks. But it would have been nice to see more of that before he had the nomination locked up, back when he was benefitting from the smears.

(A complete transcription of the lyrics is here. (NSFW audio, by the way.) H/T to RKMK and everyone else in the universe who emailed this in to us.)
Posted by Deeky at approx. 10:00 0 comments

Michael "Savage" Weiner has lost two major advertisers since attacking autistic children. AFLAC Insurance and Home Depot have pulled ads from Weiner's show. The thing that suprises and saddens me most about this is that AFLAC and Home Depot were still sponsors up to this point. I guess it's okay to viciously attack people of color, or us queers, or women, but bullying kids is one step too far. Maybe we should just be happy that Home Depot took time to "think of the children." Wevs.
Posted by Deeky at approx. 13:00 0 comments

Too Late For Jellied Eels

But, hey, if you want eel soda, check this out: New, from Japan, comes Surging Eel, the taste sensation that's sweeping the nation. Or not. The mouth-watering beverage is described as a "fizzy, yellow-colored drink contains extracts from the head and bones of eel," which is, I think, the same description used for Mt. Dew. Look for it at fine retailers near you.
Posted by Deeky at approx. 10:00 0 comments

Or, U.S. Patent 7,255,627, a bra convertible to a facemask to protect wearers from contaminated air "as a result of biological or chemical warfare, poison-based weaponry, pollution or other environmental circumstances." Nice illustration:

By the way, I'm hoping this will change Liss' stance on bra wearing and boob freedom. Buckle up for safety, my friend!

It should be no surprise that professional bullshit shoveler Michael "Savage" Weiner is refusing to back down from his earlier comments that autistic children are just "brats." Weiner has "no intention of apologizing," according to the New York Times. "In my readings," says Weiner "there is no definitive medical diagnosis for autism."

In my readings, Weiner's a bigoted, hateful, cowardly little man who should be ashamed to open his mouth.
Posted by Deeky at approx. 13:00 0 comments

Michael "Savage" Weiner is at it again, slinging his hate and ignorance at another defenseless group. Who's his target this time? Kids. Not just any kids. Sick kids. Autistic kids. According to Weiner, autistic children don't suffer a complex neurobiological disorder, they're just "brats":

"I'll tell you what autism is. In 99 percent of the cases, it's a brat who hasn't been told to cut the act out. That's what autism is. What do you mean they scream and they're silent? They don't have a father around to tell them, 'Don't act like a moron. You'll get nowhere in life. Stop acting like a putz. Straighten up. Act like a man. Don't sit there crying and screaming, idiot.'"

"[I]f I behaved like a fool, my father called me a fool. And he said to me, 'Don't behave like a fool.' The worst thing he said -- 'Don't behave like a fool. Don't be anybody's dummy. Don't sound like an idiot. Don't act like a girl. Don't cry.' That's what I was raised with. That's what you should raise your children with. Stop with the sensitivity training. You're turning your son into a girl, and you're turning your nation into a nation of losers and beaten men. That's why we have the politicians we have."

"[W]hy was there an asthma epidemic amongst minority children? Because I'll tell you why: The children got extra welfare if they were disabled, and they got extra help in school. It was a money racket. Everyone went in and was told [fake cough], 'When the nurse looks at you, you go [fake cough], "I don't know, the dust got me." ' See, everyone had asthma from the minority community."

Remind me again why this guy is still on the air?
Posted by Deeky at approx. 09:00 0 comments

"Refugees" by The Tears

Why They Are No Longer Called Firemen

Check out this front page photo accompanying a story about the California wildfires on Yahoo News.

We Don't Need Another Hero

I shouldn't have to start off more than one post in a week with "oh, for fuck's sake," but it's turning out to be one of those Wednesdays. I am seriously sitting here all gobsmacked at this piece of virulent, misogynist douchefuckery disguised as "humor."

Here's the premise of the joke: What if the makers of Guitar Hero introduced a new game called Vagina Hero wherein the player had to tap all the right buttons in the right sequence at the right time, just like in the original game, but on a vagina shaped controller to "win"? (If you're not holding your sides now from laughing so hard, well, you won't ever be. The joke doesn't get any better than that. A stupid premise has nowhere to go but downhill, my friends.) Oh, and "winning" here is defined as bringing an on-screen woman to orgasm. In case you hadn't guessed.

Of course, as the author reveals, winning is really impossible unless you buy the deluxe package ($600!) because, you know, "the inevitable truth that dudes with money are more successful with women." And the author asks, apparently devoid of any sense of irony, "Isn’t this offensive?" If you have to ask…

Sorry, the joke continues, informing us that this would actually be "a great service" to women:

We are making foreplay interesting and exciting for guys… I think women should be excited by the idea of no longer walking away from a sexual encounter with blue balls, or whatever the equivalent of that would be for women.

If you were unsure of intent here, read the description of the game's controller (mildly-NSFW image):

Just look at it. What the fuck is that? We designed it and we don’t even really know. We tried to stay true to real thing, but that's the best we could do.

And what strategy is there in the fictional little game, aside from "the sooner you're done, the sooner you can move on to the next girl"? Well, there's the move where players can "speed things up by initiating Vagina Hero's version of Star Power, 'The Shocker', by jamming the yellow, orange, and blue buttons simultaneously."

Look, I told you this joke wasn't going to get any better as we went along. It's actually getting worse. The string of really, really bad puns at the end of the piece is sort of the maraschino cherry on a cat turd sundae that is this piece of alleged humor. Nevermind the connotations behind "jamming the buttons simultaneously."

What's sad is that someone thought this clever enough to write out and somehow managed to con a cohort into creating some illustrations to go along with the piece. (Oh, hell, maybe the artist did his part first and inspired the author. Chicken, egg, whatever, I'm not going there.) Sadder still is the fact that there are, no doubt, a whole bevy of people out there who will find this just fucking hilarious.

I'm going to crawl back in bed and dream of Tetris. 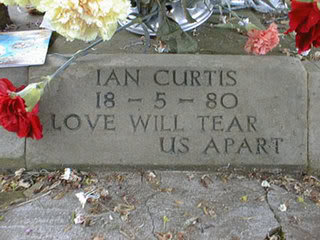 The headstone of iconic vocalist (I refuse to refer to him as a singer) Ian Curtis was swiped from Macclesfield Cemetery in Cheshire last week. Local cop Nicholas Angel said "There are no apparent leads as to who is responsible for the theft." May I suggest looking under the pillow of the next tween you see wearing a NIN shirt. New Order drummer, and former Joy Division bandmate, Stephen Morris supposes the marker was stolen as a "sick souvenir." New Order has a drummer? Huh. Loved your work on "Blue Monday." The "drummer" also appealed to the thief to "return (the headstone) or leave it at the nearest police station."
Posted by Deeky at approx. 10:00 0 comments

Notes From A Trophy Wife*

Oh, for fuck's sake, it is too early in the morning for this shit. I've got just two words for ABC News this post-holiday Monday: Go fuck yourselves. Do I really need to read shit like this as a headline from a major news organization: "Will Portia Be Ellen's Trophy Spouse?" It's too early in the morning for such sexist, misogynist, homophobic swill.

The article is, of course, a big pile of horseshit, and I don't know why it was written to begin with. But wevs. The author does note "Today, experts say, the phrase (trophy wife) is less pejorative" which is nice of her and all. Mind you, "less pejorative" is a relative and somewhat qualified phrase, and despite being an indeterminate amount of pejorative, it's still splashed all over the article, and ABC's website. So, basically, we're led to infer "it's not a very nice thing to say, but we're gonna say it anyway." (Nice graphic, by the way.) But hey, it's just one article. I'm sure it was a fluke.

Huh? What's that in the right hand column there? "Was A-Rod 'Brainwashed' by Madonna?" Another fab fuckin' headline, I see. Great, glad to hear you're not slinging the sexism just at us homos. Madonna, siren and temptress, lures poor, unassuming lad to his demise. At least that's what I am assuming the article is about. Truthfully I didn't even bother to read it. I had pictures to look at; note this headline: "PHOTOS: Alba's Post-Pregnancy Body."

Wow, a sexism trifecta right there on the front page of the entertainment section. I think that may entitle you to some sort of award.

Coverage You Can Count On

Check out this headline from a German news site: "Heidelberg Woman Bites Rapist's Penis And Escapes." Did you notice something? (Besides being reminiscent of this incident.) The editors at The Local actually used the word "rapist" to describe the attacker. Imagine that. It's a concept seemingly foreign to other news organizations. Good on you, German news eds, for not mincing words!
Posted by Deeky at approx. 15:00 0 comments