Or, Meeting the Curse Head On

Hurley's dad is Cheech Marin. Who knew? Anyway, flashback to Hugo being a little kid and he's trying to work on an old beat up Camaro and dad comes out of the house and gives him a candy bar. They jump behind the wheel and try to start the car. Hugo says it's dumb, that the car won't start without a carburetor. Dad tells him hope is never stupid. Regardless, the car doesn't start. Then dad tells him he is going to Vegas for a job, and rides away on his motorcycle. Hugo looks forlorn. On the island Hurley visits Libby's grave and laments her passing, telling her how much he misses her and how scared he is. Later he tries to talk to Charlie about being cursed but Charlie just wants him to tell him he'll be okay. Good old selfish Charlie. While they're chatting Vincent comes bounding out of the jungle with a desiccated arm in his jaw. What the hell? Hurley decides to follow Vincent but Charlie's all "fuck that monkey's paw bullshit, I'm staying here." Hurley follows Vincent, and the dog eventually drops the arms. Stuck in the corpse's fist is an old VW key. Vincent barks like he's Lassie and Hurley follows him further into the jungle and finds on VW van laying on on its side. What the hell? 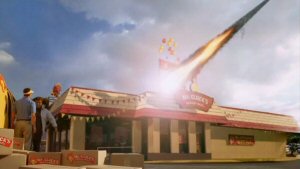 Flashback and Hurley is in front of Mr. Clucks with his old boss and he is being interviewed by Tricia Tanaka. She asks him about the lotteryand why he bought the restaurant and he starts tell her about the bad shit that has happened since winning the money. She yells cut and calls him a douche for pissing all over her puff piece. Her and the cameraman head inside to get some b-roll and outside Hurley and his ex-boss argue over their safety. "Do you hear something?" asks Hurley. Then a meteor slams into Mr. Clucks, destroying it. Back on the island Hurley looks inside the van. There is a corpse behind the wheel, his Dharma jumpsuit says "Roger." On the beach Nikki and Paulo inform the audience the survivors are out of granola bars. Way to prove useful Nikki and Paulo. I see soap opera work in both your futures. Sun asks Jin to pass her the Lucky Charms. In English. She tells him she's no longer going to speak Korean to him, she's going to immerse his ass in English like she's a Rosetta Stone CD-Rom. He's annoyed. And when Hurley arrives to asks for help fixing up the van, Jin is the only one who follows him into the jungle. Nearby, Kate and Sawyer bicker, as per usual, as they approach the beach. Kate wants Sawyer to apologize for being a douche about them doing it. Sawyer won't apologize. The two make it back to the beach and there are hugs all around. Except for one between Sawyer and Kate. In flashback Hurley arrives at his mansion and tells his mother "Mr. Clucks got hit by a meteor, or an asteroid. I don't know the difference but it's gone. It's the lottery money, the numbers, I'm cursed. And now Tricia Tanaka is dead, and her camera dude, and it's all my fault." Mom slaps him. He says the only way to break the curse is to go to Australia and mom tells him to shut up and that he's not cursed and she'll prove it. She calls out and Hurley's dad strolls in from the next room. Jin and Hurley open the back of the van and find a bunch of beer. Jin and Hurley communicate as best they can , and agree to pull Roger from the wreckage. His head falls off in the process. On the beach Charlie asks Desmond when he's going to die and Dez tries to explain it doesn't work that way, because apparently Charlie's never seen a single fucking movie about psychics in his entire life. 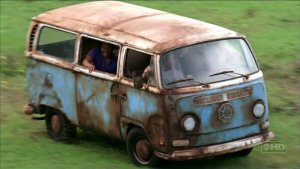 Sawyer interrupts and asks what the fuck happened to his stuff. Dez apologizes for drinking his scotch. Charlie confesses the three of them drank his liquor and Sawyer demands to know who the third person was. He then stomps off into the jungle to find Hurley. Jin wants to tip the van up but before they can get going Sawyer arrives and asks what the hell they're doing. Hurley gives him a huge hug. "I'll be damned, you all found yourselves a hippy car," says Sawyer. Jin says "It's good to see you" in English and Sawyer is impressed. Hurley tells Sawyer he's going to help them and he asks why. "Because there's beer." On the beach, Kate, Sayid and Locke discuss the Jack situation. She tells them what a douche Michael is and relays what Karl said about the Others living on this island. Then she runs off saying she's going to go get help to rescue Jack. Locke and Sayid are all, what the fuck? In flashback Hurley and his parents sit around the dinner table. After dinner is served, Hugo fires his staff, throwing a huge wad of cash at them. Dad asks what is wrong and Hurley asks mom if she's not at all suspicious that dad just mysteriously showed back up after seventeen years right after he won the lottery. She says she called him because he'd been freaking out about the numbers. Plus she wanted to get laid. Hurley screams and covers his ears. Mom sends them to the garage. The old Camaro is there. (Daddy issues. Again.) Back in the jungle, the three get the van tipped back over. Sawyer crawls in back and finds a map. And Roger's head. He freaks out a bit. Hurley explains it's Roger Workman pointing to his shirt and Sawyer replies "It's Work Man, you blockhead. That's his job. He was a Dharma janitor." Hurley tries to start the engine but no luck. Jin tells him it can't be fixed and Sawyer opens the beer. It's skunky. Sawyer asks why he cares about getting the van started. Because people need hope, Hurley explains. "If it's hope you're looking for, you're on the wrong damn island. There sure as hell ain't no hope here." Back home dad wakes up Hurley and tells him he's going to help break the curse. Dad takes Hurley to a psychic. "I'm seeing numbers. 4, 8, 15, 16, 23, 42. There's darkness around these numbers. Great tragedy." She tells Hurley he is cursed and starts to exorcise him. He offers the psychic a thousand bucks to admit his father put her up to this. She scoffs. He offers ten thousand dollars and she admits it's all bullshit. At the van Sawyer teaches Jin English and Hurley prays. Sawyer asks what the hell is doing and throws him a beer, but it just rolls down the hill. Later Hurley approaches Charlie and tells him to stop moping and come with him on a possibly fatal errand. "Look, I don't know about you, but things have really sucked for me lately and I could use a victory. So let's get one, dude. Let's get this car started. Let's look death in the face and say, 'whatever, man.'" At home, Hurley packs his bags. He tells dad he wants him to leave. Dad admits he just came because of the money, but that he now thinks Hurley should give it all away. Just save enough to get the Camaro running so they can take a trip to the Grand Canyon. Back at the van Hugo returns with Charlie, who will be riding shotgun. 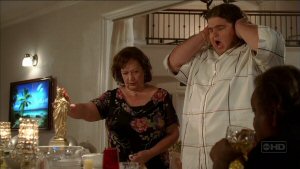 Hurley and Charlie climb in the van and Jin and Sawyer give a shove and it sails away down the hill. The van gathers speed and heads dangerously toward some rocks. Hurley pops the clutch... and vrooom vroom! the van sputters to life. Woo hoo! Sawyer and Jin and Vincent all jump in and enjoy a ride with Hurley. Later, Jin and Charlie and Sawyer return to the beach, and everyone seems happy. Except Sawyer, who is now regretting not apologizing to Kate. He drinks his beer alone. Deep in the jungle Kate finds some netting and Locke and Sayid find her. She asks why they followed her, because if they gave a shit they would have looked for her when she was missing. They said they wanted to find her, but had no fucking clue where to look until Eko's murderstick fell on John's head. (And somehow now they suddenly have a clue?) There is gunfire as Rousseau shoots at them. They tell her it's cool they just need to talk to her. Kate asks her to help them find the Others' camp. Why should I do that, Rousseau asks. "The girl who helped me escape was about sixteen years old and her name was Alex. I'm pretty sure that she's your daughter."
Posted by Deeky at approx. 16:00